The Spanish Pyrenees stretch all the way from the Basque Country on the Atlantic Coast, to Catalonia on the Mediterranean Sea. On the way it also passes through the autonomous communities of Navarra and Aragon The entire range is full of mountain roads that make for some excellent climbing.

The climbs here are generally not quite as spectacular or well known as those across the border in France, but there are still numerous passes above 2,000m altitude, and many other high climbs that feature regularly in the Vuelta and are lot of fun to ride.

We have also included the climbs in Andorra as part of the Spanish Pyrenees, since they can all but reached on a day ride from the Catalonia region.

As you would probably expect for such a large mountain chain, the scenery varies considerably between the different areas. On the western side, the Atlantic weather dominates, and the moutnains tend to be a bit lower, and lined with grass and other vibrant green colors.

The central part of the Pyrenees is dominated by the highest peaks in the Pyrenees, including Monte Perdido, Aneto and Maladeta. Furthest east, the region of Catalonia has a much more Mediterranean feel. Pine forests dominate and at times obscure the views. On the other hand, the historic villages that you pass through are a real delight, and make for great coffee stops.

Ultimately, unlike in the French Pyrenees, where cyclists get access to the finest views, on the Spanish side the roads are often pleasant and pretty rather than spectacular. To view the finest scenery on the Spanish side, you really need to get on a mountain bike or put on your hiking shoes!

The road surfaces generally of very good quality, particularly in the western part of the range. The asphalt in Aragon and Catalonia is a bit more hit and miss, but is still more likely to be smooth than rough.

One of the downsides of the Spanish Pyrenees is that some of the climbs are also quite busy roads, or are linked by busy roads. This is particularly true of some of the passes in Aragon (such as Col de Somport and Col du Pourtalet), but also some of the higher climbs in Catalonia can get quite busy at weekends and in summer.

Still, it's easy enough to avoid these climbs if you do a bit of research (or at least ride them in less busy periods). The vast majority of climbs are very quiet and typical mountain roads which are a real pleasure to ride.

The mountains are easy to get to at each end. Catalonia is well served by large airports in Girona and Barcelona, while the Basque Country has major airports in Bayonne and Bilbao. Both of these regions can also be reached from the rest of Europe by fast motorways running down through France.

The Central Pyrenees, by contrast, are difficult to reach. There are now airports near to the highest climbs, and even to get there by train requires several changes (e.g. Madrid - Zaragoza - Huesca - Sabiñanigo).

They can reached by car reasonably easy (e.g. to Vielha or over the Col du Somport towards Jaca). But if you were doing that then you would literally be driving past ascents on the French side like Port de Bales, and Col d'Aubisque. It would be difficult not to be tempted to just stay on the French side!!

The weather is very pleasant for cycling in the summer. Rain is rare (although more common in the west), and temperatures can be hot, but are often more moderate than in much of Spain.

Spring and Autumn are also very good for riding throughout the range, and even the higher passes open early in the year and stay open late. In winter, it is best to visit either end of the range - where the climbs are a bit lower and are still fine to ride when snow hits the higher peaks.

Our main mountain holidays in the Pyrenees are on the French. We simply think that it is better for riding, with more climbs close together and with more spectacular scenery. Both our Pyrenees Coast to Coast and Best of the Pyrenees holidays do go right up to the borders with Spain though, and so you get to see the scenery on the Spanish side.

On the eastern edge of the Spanish Pyrenees, our Girona & the Costa Brava holiday offers the opportunity to ride some of the smaller climbs, but it is a leisurely tour focused more on the culture and history of the region.

In the west, it is similar with our holiday in the Basque Country, which ventures into the foothills of the Pyrenees, but without tackling any of the highest or most challenging climbs.

You can find out more details about our tours in the links below.

If you would be interested in arranging a cycling holiday elsewhere in the mountains of Catalonia or Andorra, please get in touch and we would be happy to work with you to customize a tour. In the past we have, for example, run a Coast to Coast tour across the Spanish Pyrenees which was very enjoyable, and is especially something to consider if you have already done the equivalent route on the French side. 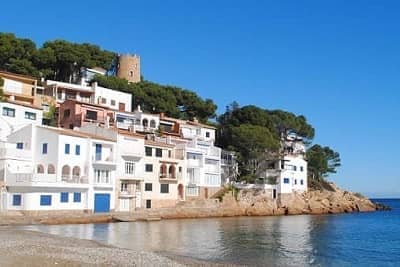