This cycling tour crosses the Pyrenees from the Atlantic to the Mediterranean, conquering over twenty-five of the most famous passes in the cycling world.

In eight days you will cross the entire mountain range, including climbs such as Col du Tourmalet, Col d'Aubisque and Port de Pailheres.


Unlike the well known Raid Pyrenees route, the emphasis of this tour is not to get from one coast to the other as quickly as possible, but rather to take our time to fully appreciate the stunning scenery along the way.

This is a really beautiful tour which combines incredible scenery along the entire route, with climbing some of the great arenas of professional cycling.

If you would prefer a self-guided cycling holiday, you may be interested in our Pyrenees: Classic Cols Tour. 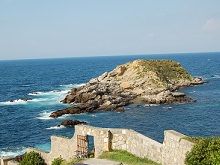 We will transfer you from the arrival point to our first hotel, situated in the delightful coastal town of Biarritz

Here we will fit you to the bikes, and give you chance to swim in the Atlantic, before we have our welcome dinner.

Depending on your arrival time, as a bonus, there is the opportunity to do short circular ride around the town. 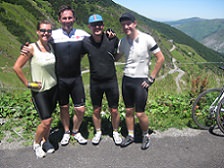 The first cycling day is quite long at just over 100km as we quickly leave behind the busier coastal roads, entering the western edge of the Pyrenees range.

The basic route is relatively gentle, with rolling terrain along beautiful country lanes, rather than any steep climbing.

This area of the Pyrenees is not as popular with cyclists as the central part; however, the scenery is stunning, with very narrow roads, winding along the edge of the vibrant green hillside.

For those looking to start the tour with a real challenge, there is the opportunity to extend the route to climb Ahuski towards the end of the day. 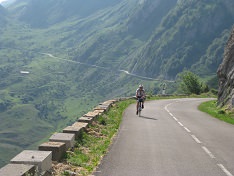 The shorter route today follows a rolling route through the Basque Pyrenees, before tackling the Col d'Aubisque. One of the most used climbs in the Tour de France, the Aubisque has beautiful scenery, particularly on the Cirque de Litor balcony road.

The medium route is the same distance as the shorter option, but tackles the Col de Marie-Blanque before the Aubisque. This is another Tour regular, and is a short but tough climb, with gradients consistently above 10% in the final 4km.

Both routes finishes in the town of Argeles Gazost. For cyclists with a lot of energy, there is the chance to extend the route to include the hors categorie climb to Hautacam. 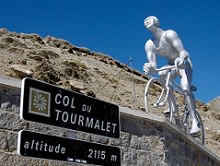 The cycling tour continues heading east over another two of the most iconic climbs in cycling. First up is the Col du Tourmalet which, at 19km long and 7.4% average gradient, is probably the toughest climb in the Pyrenees.

From the top of the Peyresourde it is a really enjoyable downhill all the way in to Luchon, where we stay for the evening. Luchon is a lively town in the heart of the central Pyrenees, and is always an entertaining place to visit.

The long route today extends the route by climbing to Luz Ardiden - this is a beautiful ascent but is only really suitable for riders with very strong legs, given the difficulty of the day! Today is an optional rest day in the charming town of Luchon. You may not feel as though you will need a rest while sat at home reading this itinerary, but on the day after Tourmalet and several other hard climbs, you may feel differently when you are there!!

However, if you are not seduced by the exquisite patisseries and cafes of Luchon, you can tackle one of the nearby climbs. The most scenic is the HC Superbagneres - used numerous times during the Tour de France, particularly during the 1970s and 1980s. Other options include the Col du Portillon or the little known, but stunning Artigue. 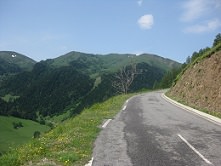 There is no easing into the cycling today, as the tour continues by climbing the Hors Categorie Port de Bales. This is one of our favourite climbs for the scenery, great road surface and lack of traffic.

After a technical descent the route becomes easier, with the Col des Ares and Col de Portet d'Aspet among the highlights on the way to St Girons.

The scenery begins to change as we head further east, with the sharp peaks of the High Pyrenees being replaced by more rounded hills of the Ariege region. 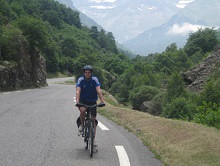 The famous cols keep coming today as we head south-east towards Andorra, climbing over the Col de Port - Massat.

Near to the end of the route we tackle the climb to Plateau de Beille - a challenging 15.8km with an average gradient of nearly 8%.

The route finishes in the charming spa town of Ax-Les-Thermes. 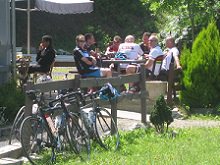 At just over 90km long this is one of the shorter routes on the cycling tour; however, it begins by climbing to Port de Pailhères - one of the few passes in the Pyrenees with an altitude of more than 2,000m.

From here we continue over the picturesque Col de Jau before a long and welcome descent into the delightful Catalan town of Prades.

The longer route today climbs to the ski resort of Ax-3 Domaines at the start of the day. 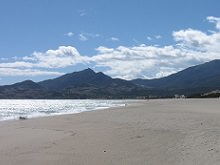 The final day of the cycling tour sees us reach the Mediterranean coast. At 90km and with no Hors Categorie climbs (just the gentle Coll de Fontcouverte), this is a really enjoyable day to end the tour.

As you get nearer to the coast, the mountains gradually give way to rolling foothills. This region, known as Languedoc-Rousillon is famous for its vineyards, and we cycle through many of them before a final long descent to the coast.

The cycling comes to an end in Argeles-sur-Mer, a pleasant town close to the Spanish border. Argeles-sur-Mer has the longest and largest beach in the region, giving you plenty of space to enjoy a celebratory swim!


After breakfast we will transfer you to either Perpignan or Girona so that you can continue your journey home - hopefully tired but fulfilled.

If you would like to continue your holiday, we would be happy to arrange for you to spend time in a city or coastal town nearby. Popular options include Barcelona, Girona and the Costa Brava.

Groups of six people or more contact us to arrange a private guided tour starting on any date.


The following are not included in the tour

The longer routes are between 5km and 35km longer and include one extra climb.

There will be a support vehicle with the group throughout, so if you need a rest or would like to take a short cut, that is no problem.

Can non-cyclists come on the trip?

Absolutely! Non-cyclists are more than welcome and will be fully involved in all aspects of the tour, except the cycling!

Non-cyclists have the option of following the group in the support vehicle, or spending longer exploring the towns and cities where we are based, before being transfered separately in the afternoon.

This tour is rated as hard - it is our most difficult cycling tour. There is over 2,000m of climbing on most days and distances are often in excess of 100km.

In order to get the most out of the holiday it is important that you have some recent cycling experience, and are comfortable riding back to back days.

However, it is important to note that this is not Raid Pyrenees or another timed cycle event.

There is no minimum speed that has to be maintained, and the route is fully supported, so if you are feeling off one day, or would like a rest, it is no problem to be transported up a climb, or even for the whole day.

What are the altitude profiles for each day?

Please click on a profile to see it in more detail

Can I make any changes to the itinerary?

If you are booking a private tour as part of a group, the itinerary is entirely flexible. Feel free, for example, to change the number of days, the difficulty of the routes, to add longer transfers or to include evening meals. Please contact us and we would be happy to discuss all the options with you.

On the 'public' tour, there is still some flexibility in the itinerary, with different route options each day and the possibility of being transferred at times. We can also add extra nights at the start are end of the trip if you wish to spend longer in Biarritz or Argeles-sur-Mer.

The arrival point is Biarritz or Bayonne. Biarritz has an international airport flying to a range of international destinations, as well as regular flights to Paris. It is also easily reached by rail from Paris.

The departure point is either Perpignan or Girona. Perpignan is generally the better option for the onward journey - it has an international airport, with flights to the UK, Ireland and Netherlands. It is also on the rail network, with high speed trains to Paris, Toulouse and Marseille.

Girona (Spain) has a reasonably sized airport with international flights to a wide range of European destinations. It is a major hub of Ryanair, who offer low cost flights throughout the continent.

Girona is also just a short distance by train from Barcelona.

In all cases we will transfer you to/from the airport or rail station as is required.

What type of bikes do you provide?

For this tour we only provide road bikes. Given the distances and the amount of climbing involved, hybrid bikes are not suitable for the tour.

All of the road bikes that we use on this cycling tour have full carbon frames and a compact chainset (50-34). They are also fitted with a generous cassette (11-28 / 12-30) to allow to spin up even the toughest climbs.

We run this tour in summer and early autumn each year when all of the passes are open.

The weather is generally warm and sunny, but in the mountains it is also unpredictable, so we advise that you bring appropriate clothing for all conditions.

Groups of more than six people please contact us to arrange the dates for a private tour.

What cols will I climb on this tour?

The accommodation on the route is in rural cottages and mountain chalets, that we believe really reflects the character of the region.

The rural cottages and chalets are all en-suite and have a level of comfort and facilites similar to a decent *** hotel.

We currently have no dates for this tour. But if you would like to do this tour in a group of six or more people, please contact us and we can arrange a private guided tour.