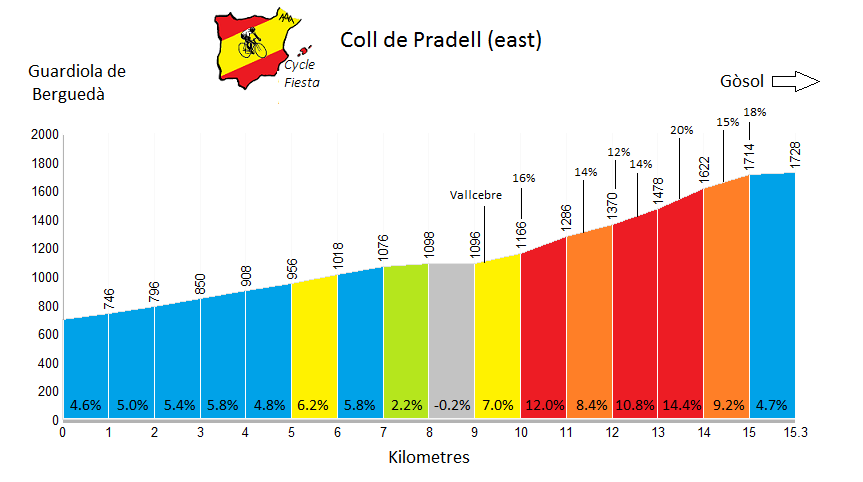 The average gradient is very misleading for the Pradell. The last 5km are brutally hard, with long stretches at 15%, 18% and 20% gradients. This is a very tough climb where it is imperative to manage your effort well.

The road surface is in very good condition.

Coll de Pradell from Guardiola de Bergueda is a very tough climb situated in the midst of the Catalan Pyrenees. It is one of the most challenging climbs in the region and is one that local riders have anxiously been pushing for inclusion in the Vuelta a España race.

The scenery is pleasant but not really spectacular; indeed, the lower slopes are more appealing than the forested upper section - which is also strewn with abandoned railway tracks and carriages. The beauty of the climb is in the gradients, however, particularly in the final 5km where the climb tilts upwards. This is one for the really mountain enthusiasts rather than casual cycle-tourists.

Coll de Pradell closes in the winter due to snow; although you can go as far as the village of Vallcebre. It is usually open from mid-April to November.

Coll de Pradell can be climbed from an even more difficult side, starting in Sant Corneli. From the west it can also be climbed on relatively short ascent from the Coll de Trapa.

We don't currently run any tours including this climb. If you would be interested in customizing an itinerary to include this climb, please contact us.