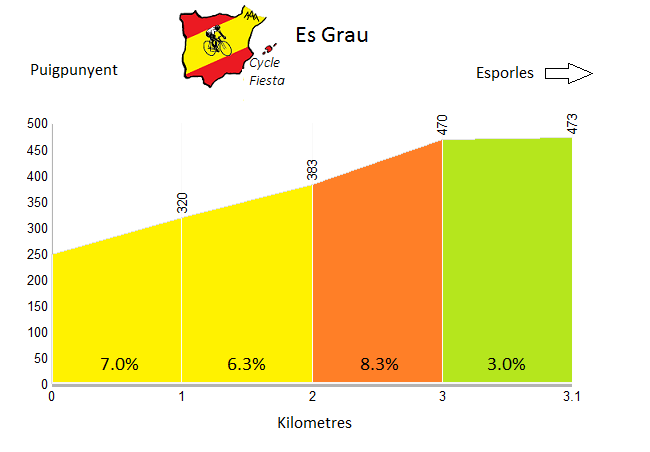 Es Grau is only short but, with an average gradient of above 7%, it is one of the steeper climbs in Mallorca. It will pose no problems to most cyclists, but when combined with several of the other climbs in the area it can add up to a challenging route.

The road surface is in very good condition, although it is narrow and care should be taken, particularly on the tight hairping bends.

Traffic is very infrequent on this climb. Even in summer you are unlikely to encounter more than a handful of cars.

Es Grau begins from just to the north of Puigpunyent, in the southern part of the Tramuntana Mountains. It follows the Ma-1101 heading north in the direction of Esporles.

Es Grau isn't one of the more popular climbs in Mallorca, mainly due to its rather hidden location in the southern part of the Tramuntana Mountains

However, it is a really nice climb to do, with beautiful arable countryside gradually changing into a series of short, sharp hairpin bends in a forested section. From the top of the climb the descent towards Esporles is fantastic, passing alongside vineyards and fields full of almond trees.

Es grau is open throughout the year.

Es Grau can be climbed from the other side. It is a gentle climb starting from where the Ma-1101 joins the Ma-1100. The first few kilometres average about 1% gradient and pass alongside pleasant vineyards. The last 2km are slightly steeper and include a few hairpin bends, but it is still rarely above 4%. Click for the full profile.

You can climb es Grau on our Mountains of Mallorca cycling holiday.