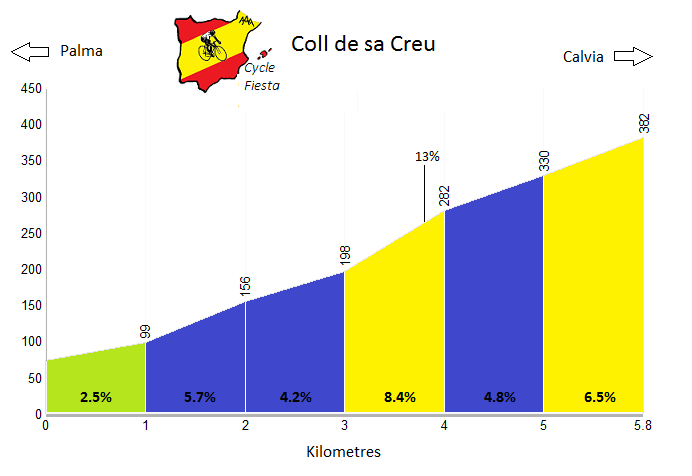 Sa Creu is a typical Mallorcan climb. It is quite short and with consistently low gradients, making it accessible to most cyclists.

***Update 2015: The roads has recently been resurfaced and is now in very good condition throughout.***

The road surface is in quite poor condition. There are numerous pot holes and the road is badly cracked in places. This is more of an issue when descending rather than climbing, but it can make for a slightly bumpy ride. There is not much traffic on the climb, even in summer.

Sa Creu begins on the north-west outskirts of Palma, shortly after a roundabout where the Ma-20 motorway meets the Ma-1043. The climb follows the Ma-1043 into the Tramuntana Mountains heading towards Calvia.

Coll de sa Creu is quite a popular climb, largely because of its convenient location close to Palma. However, we would not put it high on the list of the best climbs in Mallorca. It is forested the whole way, with only occasional views, and the poor road surface makes it slightly less enjoyable than most climbs in the area.

Sa Creu is open throughout the year.

The Coll de sa Creu can also be accessed from the west - starting at the junction of the Ma-1043 with the Ma-1016. The climb from this side is short and gentle, with just a few hairpin bends before you reach the top.

Sa Creu can be included as an extension on our Mountains of Mallorca cycling holiday..