This guided and fully supported cycling holiday crosses the regions of Aragon and Valencia in eastern Spain, visiting beautiful and charming places along the way.

Beginning in stunning Albarracín, we visit the UNESCO World Heritage city of Teruel, stunning Medieval castles, thermal springs and some of the most important Roman remains in the world on this great journey through one of Spain's most captivating regions, before finishing in the magical city of Valencia.


The route follows cycling greenways and very quiet roads, making for really relaxing and enjoyable riding. The routes are suitable for riders of all abilites, with easy basic rides and optional daily extensions for those who wish to cycle further.

As well as great cycling and diverse historic monuments, this tour is also a delight for food lovers. We enjoy two fine tasting menus, one centred around the local delicacy of truffles, and also enjoy an authentic paella experience.

On this tour we use some of the best accommodation in the region, choosing boutique spa hotels and historic buildings in central locations to add an extra dimension to the experience. 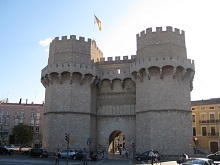 We pick you up from Valencia airport or train station and transfer you to Albarracín, situated in the mountains of the region of Aragon.

One of the most charming and picturesque towns in Spain, Albarracín is surrounded by its imposing Medieval wall and boasts a compact old town, centered around the Alcazar, Cathedral and several impressive palaces.

Albarracín is a fantastic town for exploring and we will also take advantage of its fine gastronomic tradition in the evening; by enjoying a seven course tasting menu. 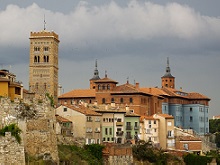 From Albarracín we cycle through the Rodeno Natural Park following narrow, winding lanes through pine forests as we head towards the provincial capital of Aragon - Teruel.

One of the most important towns in the historic Kingdom of Aragon, Teruel is a UNESCO World Heritage site thanks to its incredible mudejar architecture. It's historic center is a marvel thanks to its mixture of Romanesque, Islamic and Renaissance styles; a vivid reminder of the diverse history of this part of Spain.

Shortly before arriving at Teruel we also pass by the ancient ruins of Alto Chacón, a celt-Iberian settlement that was later conquered by the Romans. 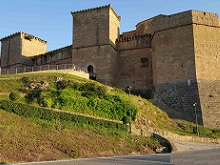 From Teruel we continue on the cycling greenway for part of the route, before joining a beautiful quiet road through rolling countryside. The ride has gentle gradients throughout and is pleasantly undulating, offering great views and delightful backdrops.

The destination is the small town of Mora de Rubielos - dominated by its Medieval castle, which was a key border fortification during conflicts between the rival kingdoms of Castile and Aragon. The town is famous for its local truffles and in the evening we enjoy a gastonomic treat, with a five course tasting menu centered around the local produce. 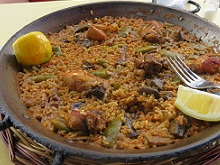 The route today crosses from the region of Aragon into the province of Valencia, following the Mijares River for much of the day. The ride follows delightful quiet roads with a mixture of mountain and forest scenery.

The ride ends in the small town of Montanejos which is home to a pleasant historic center and also, more famously, thermal springs. The natural thermal baths were built during the Arab era and are completely open and free to the public to visit at any time.

For lunch we enjoy a traditional paella in a beautiful setting next to the river. 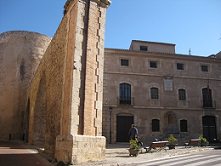 The route passes the beautiful reservoir at Navajas and finishes in the town of Segorbe. An important town since Roman times, Segorbe continued to be of prominence during periods of Visigothic and Muslim rule. Today, the Medieval walls, cathedral and Archaeological museum give an idea of the history of the town.

Segorbe is also a center of olive oil production, and there are opportunities to do tastings in the town. 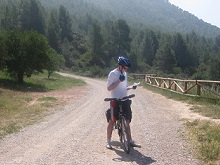 The final day in the saddle follows another cycle way form much of the route, heading mostly downhill towards the Mediterranean coast and the city of Sagunto.

An important town in the Ancient World, Sagunto played a key role in the development of history in the west. It was here that Hannibal besieged before taking his elephants across the Alps and entering into the Second Punic War with the Romans - an event which changed the power balance of the Mediterranean world for seven centuries and led directly to Roman occupation of Spain.

The remains of the Roman citadel are the star attraction and are combined with a later Arabic castle built on the same hilltop. Elsewhere in the town the Roman theatre and Jewish quarter are also well worth visiting.

After lunch in Sagunto we transfer to the city of Valencia where we stay in the old town, just a short walk from the UNESCO World Heritage listed silk exchange.

After breakfast, the cycling holiday comes to an end. We will transfer you today to Valencia's airport or rail station.

If you would like to extend the holiday, please contact us, and we would be happy to organise additional days with more excellent routes.

The routes is 35-45km each day, with additional optional extensions.

The routes are on quiet country roads, with some shorter sections on off-road cycle routes (with a good quality, well conditioned gravel surface).

Can non-cyclists come on the trip?

Absolutely! Non-cyclists are more than welcome and will be fully involved in all aspects of the tour, except the cycling!

Non-cyclists have the option of following the group in the support vehicle, or spending longer exploring the towns and cities where we are based, before being transfered separately in the afternoon.

This tour is rated as easy-medium difficulty on our Tour Level Guide. The cycling begins at nearly 1000m altitude and finishes at sea level, so there is considerably more downhill than uphill throughout the ride. There are some climbs, but with gentle gradients and there is also a support vehicle throughout the routes in case you don't wish to cycle at any point.

Overall, this is an excellent choice for a first time cycling holiday, or if you like to do routes that have some challenge (not just cycling alongside a flat river for a week!), but which still give you a lot of time to explore things that look interesting to you - both on and off the bike.

How busy are the roads?

This tour uses quiet country roads and long distance cycle routes (with no cars allowed). There is very little traffic throughout.

The cost is made up principally of the extra cost of accommodation when not sharing a room. We have made every effort to keep this to a minimum wherever possible.

The arrival and departure points are the city of Valencia. Valencia has a large international airport serving many destinations.

If you can not find a direct flight to Valencia, Alicante is the next nearest major airport, which is just two hours from Valencia by train or bus.

Alternatively, Madrid and Barcelona are both just three hours from Valencia by train.

We will transfer you to the hotel from Valencia airport or train station (or another hotel if you are already in Valencia).

For this tour we recommend our hybrid bikes. The distances are quite low and there are only a couple of climbs, so the more upright position of a hybrid bike will allow you to appreciate the scenery more.

E-bikes are also available for this route.

We run this tour in spring and fall/autumn each year. Groups of more than six people please contact us to arrange the dates for a private tour starting at any time throughout the year.

Can I see the altitude profiles for each day?

Below are the altiuide profiles for each day. In addition to this there are optional extensions each day for anyone who wishes to ride further.

We believe that the hotels that you stay in are just as important as the towns that you visit and the scenery that you ride through. On this tour we have chosen accommodation that is of a high quality and is typical to the area.

In the larger towns, these are luxurious hotels set in a prime location for exploring the city. In the smaller villages we use high quality independent hotels with charm and local character.

In Albarracín you stay in the historic center in a converted historic palace. This boutique hotel is just a short walk from the Medieval walls and alcazar. 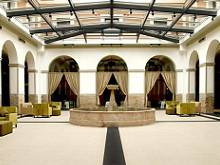 In Teruel you stay in an excellent **** hotel in the heart of the historic center. It is within very easy walking distance of the UNESCO World Heritage sites and has large, uniquely styled rooms.

In Mora de Rubielos you stay in a delightful SPA hotel situated at the foot of the town's emblematic castle. The hotel is also the best restaurant in the town, offering a gourmet tasting menu, and which specializes in local truffles.

In Montanejos you stay in a small, charming *** hotel situated in a prime location overlooking the river. It is within walking distance of the town's historic thermal baths.

In Segorbe, you stay in a beautiful **** spa hotel that is situated in a restored 18th century convent.

In Valencia you stay in a excellent **** hotel situated on in the heart of the old town. It is beautifully decorated and is less than a five minute walk to the cathedral and La Lonja - a UNESCO World Heritage Site.

To find out more about how we select our hotels, please see our accommodation page.


If you would like to do this tour in a group of more than six people as a guided tour, please contact us and we can arrange a private guided tour.