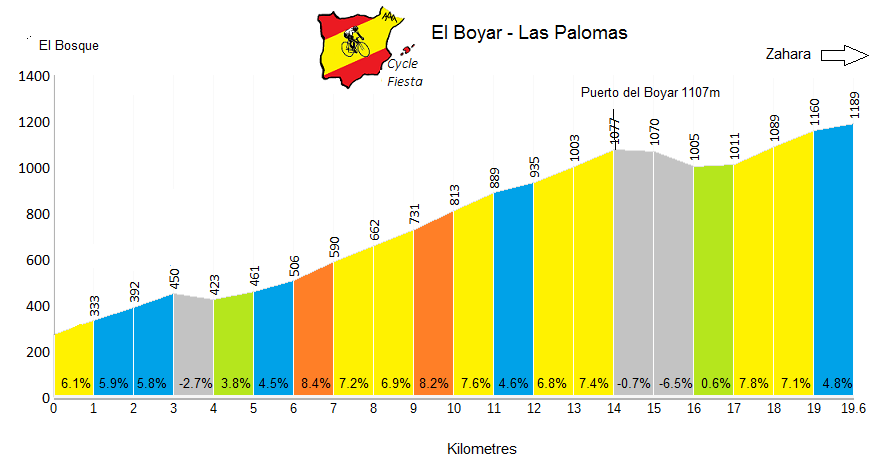 The gradient is fairly steady throughout the climb and the gradient never reaches double figures for any appreciable length. There are also a couple of downhill sections to recover from them.

Overall, Las Palomas is not an especially difficult climb, but if you are racing it or pushing hard then it can be a challenge.

The road is in very good condition throughout the climb.

There are not many cars on the climb, but it is not completely empty so normal traffic precautions should be taken, especially on the descent. 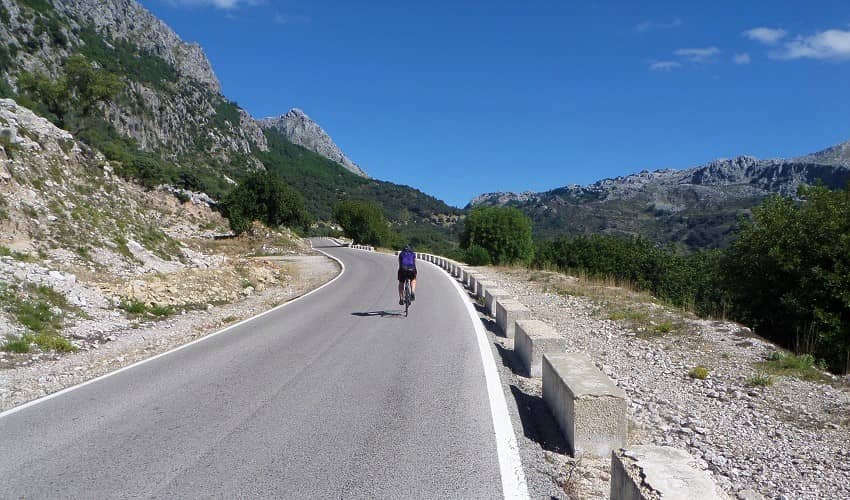 The climb to Puerto de Las Palomas is situated in the Sierra de Grazalema close to where the provinces of Cadíz and Málaga meet. From this side you first pass over Puerto El Boyar, before then climbing up to Las Palomas.

This route to Las Palomas begins in the town of El Bosque, at the junction of the A-373 and A-372. It follows the A-372 all the way to the Puerto El Boyar (although be careful not to miss the sharp left hand turn just as you are leaving El Bosque).

After climbing over the Puerto El Boyar there is a short descent, before you turn left onto the CA-531 to climb the final few kilometres to Puerto de Las Palomas.

Las Palomas from El Bosque is a really enjoyable climb. On the lower slopes there are some pleasant views occasionally, although much of the scenery is hidden by trees. As you get higher; however, the views become more and more spectacular, with the approach to the Peurto El Boyar particularly impressive.

The climb was descended towards the end of Stage 3 in the 2014 Vuelta a España, with the day eventually won by Australian sprinter Michael Matthews. If you are in the area, then Las Palomas is one of the best cycling climbs, regardless of which side you choose to go up.

The climb is normally open throughout the year, although sporadic closures in winter are possible. In the 2014 edition of the Vuelta a España temperatures reached in excess of 40°Con the slopes of Las Palomas, so bear that in mind if you plan to visit in the height of summer.

There are several other ways to climb to Las Palomas. Two of the best are via Grazalema and from the town of Zahara.

You can extend our Seville to Granada cycling holiday to include this climb. Or please contact us if you would like to arrange a custom tour in the area.