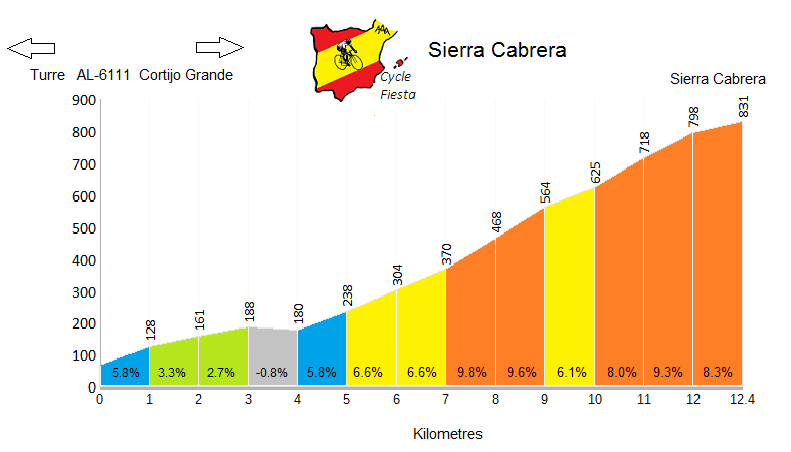 Sierra Cabrera is a more challening climb than the profile suggests. In the second half of the climb there are a lot of steep sections, followed by flatter sections, which isn't shown on the average gradient.

From the junction where this profile finishes, it is possible to continue climbing for a further kilometre, averaging 19% and with a maximum of 30% gradient!

The road is mostly in good condition. However, there are a few sections that is bumpy where a lot of potholes have been re-laid - the worst area is as you pass the village of Cortijo Grande. The road also becomes narrow at the top which can make the descent quite slow. Overall though, it is absoultely fine to climb on a road bike.

There is very little traffic on the road throughout the climb. 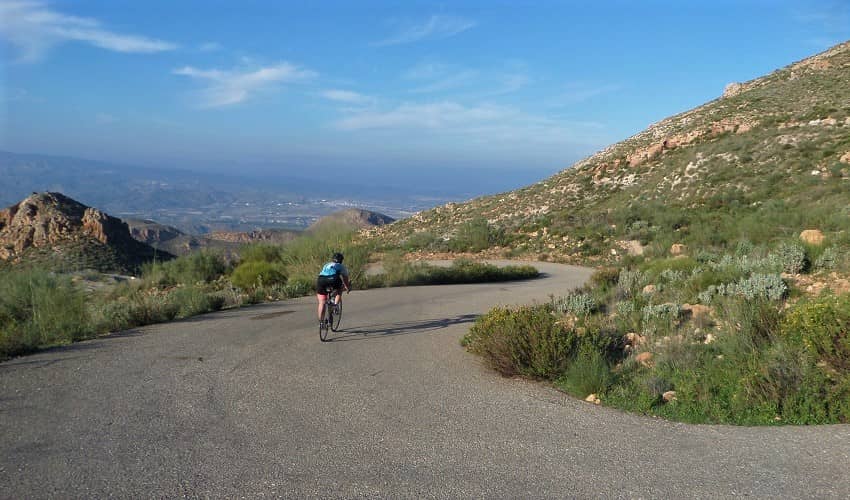 Sierra Cabrera is a narrow and secluded climb situated close to the town of Turre in the Almería province. This route passes through the tiny village of La Carrasca.

It begins from a junction off the AL-6111, two kilometres to the west of Turre. From here you turn south, following the signs to the village of Cabrera. The road then climbs past a golf course and La Carrasca before you reach a junction at Sierra Cabrera - the highest point on the road.

Sierra Cabrera is one of the more picturesque climbs in Almería. The scenery is greener than the climbs further in land, and the numerous hairpins make for some great views as you look back down the climb.

The climb is easily accessible from the town of Mojacar and in the winter it is not uncommon to find professional cycling teams doing training rides in the area. The climb is usually open throughout the year.

The more popular route to climb Sierra Cabrera is starting from Turre.
Although it starts from nearby this route, the road itself is different for the entire climb.

You can extend our Cabo de Gata cycling holiday to include the climb. Or please contact us if you would like to arrange a custom tour in the area.