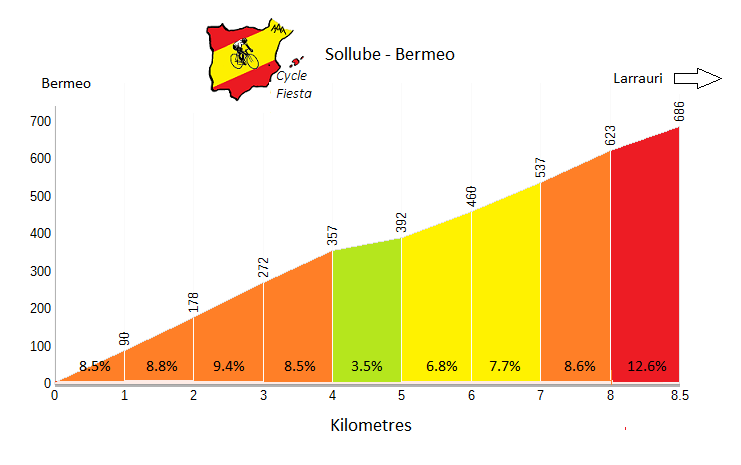 The road surface is generally in good condition; although it does become slightly broken at times towards the top of the climb.

There is little traffic throughout.

Sollube is a well known cycling climb, which has been used for many decades in important races in the region. It is also one of the five Deiadar-Mendiak - visible summits from which messages were sent, summoning members of the local government to meetings. The messages were sent by fire or by a traditional Basque horn.

This route from Bermeo is far from the most popular of the many routes to the top; however, in our opinion it is the most enjoyable to cycle. There are challenging gradients, particularly in the first few kilometres, but the climb from this side also has beautiful scenery throughout and very little traffic - unlike the other routes which use the busy BI-636 road.

Sollube is open throughout the year, although is subject to short-term closures in the winter if there is significant snow.

Sollube can be climbed from various sides; the classic side is from Larrauri.

Sollube can be climbed as an optional route extension on our Basque Coastline cycling holiday.