Salamanca is a city of around 200,000 people in the Castile y Leon region of the country. It came to prominence in Roman times and, by the 12th century, had become one of the most important cities on the Iberian peninsula. Around this time the old cathedral was built as well as the University of Salamanca, which soon became one of the most important universities in Europe.

Much of the surroundings of Salamanca are not the best for cycling in Spain; however, there are a couple of exceptions.

One popular cycling route that passes through the city is the Via de la Plata (Way of Silver) - a Roman route from Sevilla to the north of the country.

The Via de la Plata is also one of the many routes of the Camino de Santiago; however, at nearly 900km, the whole route can only be done as part of a longer holiday. The route follows the N-630 road both north and south of the country; despite being a national road, there is relatively little traffic as a motorway runs parallel to it. The scenery here is typical of the region: largely arable farmland and it is gently undulating with no major climbs.

Another option is to base yourself close to one of the natural parks which are around 100km from Salamanca. From here you can take a couple of days out to ride there and back to Salamanca, whilst also benefiting from the more interesting countryside elsewhere.

To the west is the Arribes del Duero on the border with Portugal - this is a picturesque park with several rolling routes. To the south, the Sierra de Gredos and the Batuecas-Sierra de Francia offer more mountainous routes - with some climbs over 1000m in altitude, but with gradual gradients. The latter of the two is the best choice, with some fine scenery and several different roads, all with little traffic. The mountains of Asturias to the north are also a great choice for riders who like to tackle challenging climbs.

Our cycling holiday from Salamanca to Segovia explores some of the best cycling routes of the region, following mostly rolling roads between the most interesting historic towns in the region. We visit Zamora, Valladolid, Segovia and the Ribera del Duero wine region as we tour the region of Castile.

Check out the links below for more details about that and other tours that we run in nearby regions. 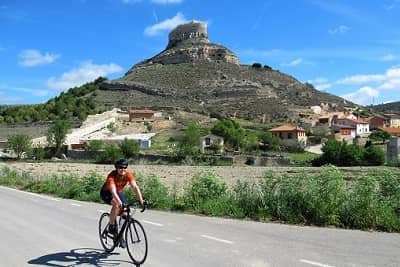