The Top 20 Cycling Climbs in the Pyrenees 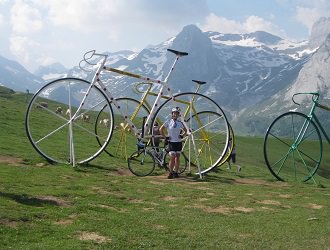 Take a look at the climbs that we have chosen, and let us know if you agree, or if you think there is something more deserving of a place on the list!

The Best Places for Cycling in The Pyrenees 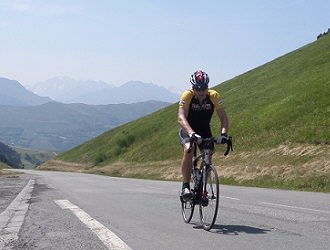 The Pyrenees are a vast mountain range, stretching over 400km from the Atlantic to the Mediterranean Sea and spanning three countries. Because of their size it can be quite daunting when planning a cycling holiday to the area. Without knowledge of the area, it can be difficult to know where to base yourself, where the best climbs are and which areas are generally the most enjoyable for cycling.

It may come as somewhat of a surprise for us to say this, as a Spanish based company, but the French Pyrenees are by far the best for cycling. In France there are more climbs, less traffic, the most famous cols and better facilities for cyclists than in the Spanish Pyrenees. That is not to say that the Spanish Pyrenees and Andorra are bad for cycling - because they're not, they are amazing - but the French Pyrenees are just even better.

Here you can find our analysis of all the main road cycling areas for all three countries: 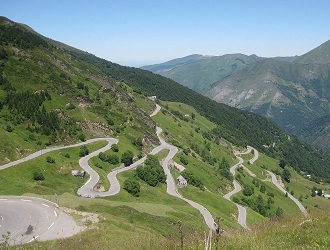 Luz Ardiden is, without doubt, one of the most spectacular climbs in the Pyrenees. It is a favourite of cyclists due to its picturesque scenery and excellent location towering above the village of Luz Saint Sauveur.

Somewhat surprisingly given its reputation, Luz Ardiden is a relative newcomer to the Tour de France, having first been ridden in 1985. Since then it has been ridden a further seven times, with the most recent being Samuel Sanchez's impressive stage win in 2011.

Unlike the famous cols in the area, notably Aubisque and Tourmlaet, Luz Ardiden is a dead end, so is always the finish to a stage. It is an 'hors categorie' climb, ranking it alongside the most difficult in the Tour; although, having ridden it several times, it certainly is not as punishing as neighbouring Tourmalet or Hautacam... 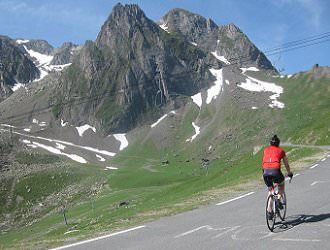 The anticipation rises as you turn left into Luz-Saint Sauveur. The beautiful Luz Ardiden looms imperiously to your right, but it will have to wait - you have bigger things on your mind. You pass the congregation of cyclists in the town square - an excited chattering of different languages about to converge on their Mecca.

As you loop to your left you catch a glimpse of the small white sign detailing the 19km that stand between you and the greats of cycling. The kilometres begin to fly by; the excitement and adrenaline in following in the tracks of Fausto Coppi and Eddy Merckx act like a strong tailwind ushering you along the tree lined lanes....

Tourmalet is generally recognised as the star of the Pyrenees and is undoubtedly one of the highlights of our cycling holiday to the region. It is the highest pass, arguably the toughest climb and has been featured in more Tour de France stages than any other mountain.

However, situated across the Gave de Pau valley is probably, at the same time, the most beautiful and the most inhospitable climb in the Pyrenees - the Col d'Aubisque. Unlike Tourmalet and the other notorious climbs in this part of the Pyrenees, such as Luz Ardiden and Hautacam, the Aubisque is rarely a decisive part of the Tour de France route.

It has been featured over sixty times, yet is nearly always a transition from the western to the central Pyrenees. For a touring cyclist, however, it offers arguably the finest views in the Pyrenees and is, without doubt, one of the most satisfying mountains to climb.