Monte Grappa is one of Italian cycling's greatest climbs. The ascent from Romano d'Ezzelino is the classic side and is - rarely for a high mountain that is not a ski resort - kept open throughout the year. Grappa is a hugely enjoyable climb and is rightly one of the Giro d'Italia's favourite mountains.

Slightly dettached from the rest of the Italian Alps, Grappa, in many ways, is Italy's equivalent of Mont Ventoux. Like Ventoux, it has several different sides of varying difficulties, which all meet before the final few kilometres to the summit. It is also a long and hard climb, with a huge elevation gain.

The scenery is very pleasant - much of it is in forest, but with regular openings providing panoramic views. At the summit there is also a war memorial and museum, as Grappa was the site of bloody battle during the First World War. It is believed that nearly 90,000 Italian and Austro-Hungarian soldiers lost their lives on the mountain over the course of three battles in late 1917 and 1918.

In order to provide access to the museum at the top of the climb, this side of Monte Grappa is kept open throughout the year. Bring lots of warm clothes if you plan to climb (and then descend!) it in winter.


Monte Grappa can even be climbed in the middle of winter

The road surface is in very good condition throughout.

The climb generally carries little traffic. Outside of summer it is virtually empty. In the main holiday season it can get slightly busier, but is still perfectly rideable.

Monte Grappa can be climbed from many different sides. This is the classic side from the Giro d'Italia, and it is probably the easiest ascent. It also the side that is most accessible from the cities of Padova and Vicenza.

At the moment we do not have any tours including the climb to Monte Grappa. If you would like us to organize a custom cycling holiday including this climb, please contact us and we would be happy to do so.

You may also be interested in the links below, to some of the holidays that we are currently running in high mountains. 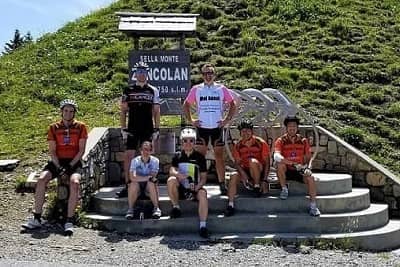