The most identifiable part of León is the vast Gothic cathedral that overlooks the centre. However, there is a wide variety of other historical architecture in the city; from the Medieval wall that rings part of the centre, to the neogothic Casa de Botines - an intriguing building designed by Antoni Gaudi.

This articles describes some of the best areas for cycling around the city of León, with a particular emphasis on the historic Camino de Santiago pilgrimmage route. 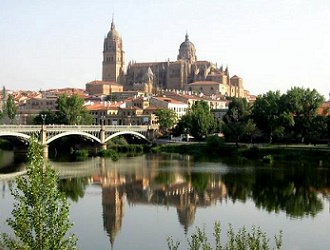 Salamanca is a city of around 200,000 people in the Castile y Leon region of the country. It came to prominence in Roman times and, by the 12th century, had become one of the most important cities on the Iberian peninsular. Around this time the old cathedral was built as well as the University of salamanca, which soon became one of the most important universities in Europe.

The city is well known for its impressive historical sites; however, in this article we are more interested in the best cycle routes around the Salamanca region...