The route for the 2014 Vuelta a España has recently been anounced and it throws up some interesting questions.

The organisers seem to have moved slightly away from the format of previous years. There are still a few steep finishes, but they are no longer the defining feature of the race and may result in some different names at the top of the leaderboard.

Here we look at five of the highlights of the Vuelta route, and analysis where it could be won or lost. Also, don't forget that you can get close up to the action on our fantastic cycling tour covering the best of the climbs in the Vuelta.

Last year the Vuelta was decided on the final climb of the penultimate day, with a brutal battle on the slopes of Angliru. This time, the organisers hope to delay the outcome even longer - with a flat 10km individual time trial making up the final stage.

The traditional victory parade into Madrid for the last stage of the Vuelta is a fitting lap of honour with which to finish the race. However, an individual time trial is even better. It will force the pure climbers to try to gain even more time in the mountains and will keep the drama going right until the end.

The time trial will follow part of the route of the historic Camino de Santiago and, along with the World Championships in Ponferrada, it provides a golden year for cycling in north-west Spain.

There is one other time trial on the route which, rather intriguingly is downhill for the vast majority of its 35km. This again suggests that the organisers are perhaps looking to give more of a chance to heavier riders, rather than the 'mountain goats' that have dominated the Vuelta for the last few years.

The first nine stages of the Vuelta this year will all be in Andalucia, Castilla-la-Mancha or the south of Aragón. This contrasts to the last few years which have been mostly in the cooler north of Spain. All of these stages take place in August - the height of summer - and all will be crushingly hot.

Temperatures close to, and even occasionally above, 40 degrees celsius are not un-common and could play an important part in the race. Normally, the breeze created from cycling at an average speed of more than 40km/h is enough to offset the heat; however, there is also significant climbing during these stages when the heat will become a major factor.

Mild heat stroke is a possibility for riders that push slightly too hard, with recovery taking that much longer once you have pushed too far into the red. Hydration also becomes a major issue - in particular replacing salts and minerals lost through sweating. Cumulative losses over nine days in this kind of heat may well leave riders depleted and could see some challengers losing significant amounts of time on seemingly innocuous stages.

In theory, this should suit the Spanish and South American riders more than those from Northern Europe. However, in reality, it comes down to who can best adjust their limits to the conditions - and who has the best preparation in terms of re-hydrating and re-fuelling between stages.

Angliru may be the hardest climb in Spain and Pico de Veleta may be the highest; however, there is none more beautiful than Lagos de Covadonga.

Lagos de Covadonga is well known to us at Cycle Fiesta, featuring in both our Mountains of Northern Spain and Picos de Europa cycling holidays. It is stunningly beautiful, but also very tough. Kilometres 7-13 average over 10% and include a section known as La Huesera, an 800m section which doesn't drop below 12% and is at 15% for long periods.

The Lagos de Covadonga climb will probably not be the decisive climb in the race, coming in Stage 15, but it will certainly allow the contenders to open up some significant time gaps. This stage will certainly favour the more nimble climbers, with Nairo Quintana and Joaquim Rodriguez sure to be among the favourites. 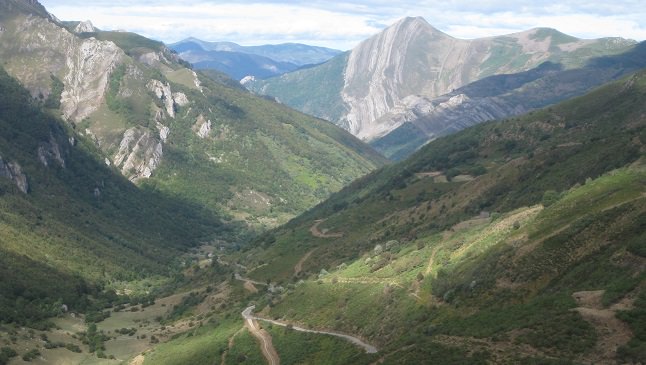 The following day to Lagos de Covadonga is the hardest stage of the Vuelta in 2014 - and it is brutal.

There are five tough mountain climbs, all of which are substantial in length and steep in gradient. After climbing the Colladona there is a long downhill before the action really begins with four category one climbs in less than 100km.

The first, the Alto de Cordal, is usually the prelude to climbing Angliru and is itself relentlessly steep near the top - although it's short length should allow much of the field to stay together. Next up is the Cobertoria, which averages over 8% for 7km and has ten separate sections that are above 10% gradient. These, however, are just a warm up for the final two climbs, as the race enters the Somiedo Natural Park.

The first climb into the Somiedo (and the fourth climb of the day) will go over Puerto de San Lazaro from the more challenging side. From 5.5km to the summit at 11km, the climb averages 11% gradient with almost no respite throughout.

After a steep and very quick descent, the riders will start the final climb of the day - the Farrapona. The Farrapona was only recently paved, but still made an appearance in the 2012 Vuelta. It is the kind of climb that professional cyclists either love or hate. The gradient is so inconsistent that it is very difficult to maintain any kind of rhythm; however, that also makes it perfect for attacks.

The opening kilometres are fairly gentle before the climb really kicks up in the final 7km. From here on in there are numerous kicks up to 12% and, on the back of four tough climbs, it would be a surprise if several of the major challengers didn't blow up on this section.

This will be an incredible stage in fantastic surroundings - and is certainly one that will tear the race apart.

This is not really related to the route, but a stronger than usual field is expected in the Vuelta this year. The World Championships will be in Ponferrada just two weeks after the end of the Vuelta. The course will be hilly, making the Vuelta the perfect preparation.

In addition, there are fewer mountain top finishes in the 2014 Vuelta, which will provide more encouragement for sprinters and all-rounders, rather than just the pure climbers.

The Colombian duo of Nairo Quintana and Rigoberto Uran are expected to try for a Giro, Vuelta and Worlds treble, while the Spanish elite of Rodriguez, Valverde and Contador will also probably be in attendance. Added to that, there will no doubt be strong representation from Sky (possibly Wiggins or Porte) and it will be interesting to see if Chris Horner can find a team to help him defend his title.

Outside of the main contenders, the likes of Gilbert, Cancellara and Sagan will be tempted to take part to build towards a peak at the World Championships.