Why Alberto Contador will win the Vuelta a España

The Vuelta a Espana, which begins on saturday, is causing much excitement in cycling for various reasons. Firstly, it will mark the return to grand tours of Alberto Contador, who has completed his ban for testing positive for clenbuterol. Contador is by far the most successful stage racer of the last five years, and it will be interesting to see if he can reach the levels of the 2011 Giro d'Italia again (his last great performance).

In addition, for the first time we will see Chris Froome leading team Sky. After a slow start to the year, his unbelievable form in both the Tour de France and the Olympics will no longer just be used to pace Bradley Wiggins. The winner of the Vuelta last year, Juan Jose Cobo comes off the back of an awful Tour de France, perhaps suggesting he was using that just as preparation to peak again on home soil. The Spanish have several other riders with high hopes in the race including Joaquim Rodriguez and Igor Anton, the leader of Euskatel Euskadi.

Although it promises to be an entertaining three weeks of cycling; Contador remains the overwhelming favourite to win. Here we will look at some of the reasons why he should prosper, and also why he might not.

We do not know what Contador's form is like. He rode in the Eneco Tour last week, but was by no means going flat out, and the course is very different to that of the Vuelta. What we do know, however, is that he will have designed his training to peak for the Vuelta. He has had several months (since the Tour of Mallorca in early February) where he has been training exclusively in preparation for this race; so his conditioning should be excellent, despite the lack of competetive racing.

In contrast, some potential rivals such as Froome and Valverde, have come off the back of competing at the sharp end of the Tour de France. It is notoriously difficult to peak for two consecutive grand tours, and the fresher legs of Contador will make a difference. 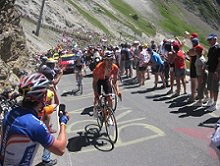 The entire route is set north of Madrid; with many days passing the various mountain ranges from the Pyrenees to the Picos de Europa. All of the main contenders are specialist climbers, so the fact that there are several mountain top finishes will not concern any of them. However, some of the climbs (for example the Bola del Mundo on the penultimate day) are quite steep and will favour the bursts of acceleration that the likes of Contador and Froome are most comfortable with.

Although most of the contenders are Spanish, the majority of fans will be cheering for Contador. His popularity remains largely untouched by the drugs ban, with many Spanish supporters believeing it was unfair. Local riders, for example Rodriguez in Catalonia or Anton in the Basque Country, will get support as well, but Contador is still the real superstar of Spanish cycling.

One area where Contador is undoubtedly at a disadvantage is his team. Although he has good climbers, such as Navarro, with him at Saxo Bank, the team lacks the strength in depth of Team Sky. Froome can count on Uran, Flecha and Henao to provide decent support in the mountains. Rodriguez can count on the support of Menchov (unless of course Menchov proves to be the more threatening GC contendor), and Cobo will be helped by Valverde and the excellent young Colombian Quintana (a dark horse for top ten overall).

The first day of the Vuelta is the ever controversial team time trial. It is only 16km on a flat route around the city of Pamplona; however, Team Sky have clearly targetted this as a way to gain time. They have included specialists such as Stannard and Porte, with the aim of Froome opening up at least a twenty second gap on Contador. That could prove to be a big psychological advantage so early in the race; however, it could also leaves Sky having to try to defend the lead from day one. 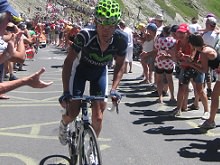 Overall, Contador is the clear favourite. He has targetted to peak for this race, both mentally and physically, for a long time; and should have too much in the tank for the rest. Froome is the second favourite with the bookies' however, he would have to put in the greatest performance in cycling history to win, after his efforts in France. For all Sky's 'marginal gains' this is unlikely. A betting tip would be to lay Froome after he takes a probable lead in the team time trial.

The real threat for Contador comes from his fellow countrymen. cobo's form is so erratic it is difficult to know how he will go - and it is entirely conceivable that Quintana could become the de facto leader of the team. Rodriguez is dangerous if he has recovered sufficiently from the Giro d'Italia; although he has consistently struggled to turn promising results into wins. Likewise, Anton is good for a stage or two, but it is difficult to see him sustaining the effort required to beat a fresh Contador over three weeks.

Cycle Fiesta's tip is for Contador to win by over five minutes. He will want to return with a bang, and by mid-way through the second week he should have his race sharpness back. From that point, he will blow the rest of the field away.

If you are interested in cycling parts of the Vuelta course, take a look at our cycle tours around Spain.