Turia River: The Lifeblood of the Valencia region

Providing the water for the rice, oranges and olives grown in the region, the Turia River is at the centre of the history of the development of the Valencia region.

In addition to its use in agriculture, the river was diverted in the 1960s to prevent it from flooding the city of Valencia. The old course has been turned into a natural park, complete with an excellent network of cycle routes.

The Turia begins in mountains of Albarracin in Aragón; from here it flows through the Valencia region finishing at the Mediterranean Sea, in the city of Valencia. Although the river is a fairly modest 280km (160 miles), it is vitally important to providing water to one of the driest regions in Europe.

The river has also caused problems for the region. Following a large flood in the city of Valencia in 1957, it was decided to divert the course of the river to the south of the city.

Not only has the re-direction of the river solved the problem of flooding, it has also created a vibrant park in the heart of Valencia, where the river used to run. The park now hosts the Calatrava designed City of Arts and Sciences, as well as many sport and leisure facilities.


Agriculture Sustained by the Turia

Historically, agriculture has always been the basis of the Valencia economy. Although recently tourism and the service sector are becoming increasingly, the region is still a large producer of rice, olives and oranges.

Much of the water for the cultivation of these prodcuts is carried by the Turia River and is tributaries. These products help to form some of the cultural identity of the region. 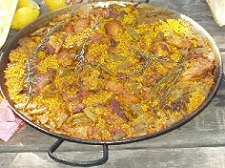 Rice from Valencia is the key ingredient in Spain's most famous dish: paella. In addition to Paella, rice is used in over thirty different unique recipes, including Arroz Negro and Arroz a Banda.

Valencia rice is high in starch, giving it a 'pearly' appearance. The grains are typically short and a vibrant white colour. The rice is perfect for absorbing the flavours, such as saffron, which are typical to the dishes of the area.

Anywhere that you go close to the Turia river, there are sure to be orange trees close by. There are millions in the flood plains of the river.

The main characteristics of the oranges, which are exported around the world, are the sweet taste and the high content of juice.

The majority of the olives, are used in the manufacture of olive oil. Sagunto, a town just to the north of Valencia, produces a particularly fine oil, with protected status from the European Union.


Cycling and the Turia 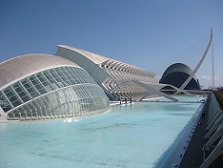 From the city of Valencia to the town of Vilamarxant, around 35km (21 miles) away, the area around the Turia River has been turned into a natural park.

Within this area, there are many kilometres of cycle paths which offer superb scenery of the river.

The park is a great way to leave the city of Valencia completely free of any traffic.