Five Things to do in Valencia

Valencia is one of the most intruiging cities in Spain. It is the third biggest city in Spain, but, unlike Madrid and Barcelona, it has a very relaxed atmosphere. Valencia has a rich history, with the Roman and Moorish influence apparent; but it also boasts cutting edge modern architecture and design.

Most of all though, it is a fun city to visit. The people are relaxed and friendly, and the culture of the city has not been heavily influenced by toursits; as is the case in, for example, Alicante or Malaga. If you are a first time visitor to Valencia, you may wonder what you can see and do in the city. Here is our list of the top five experiences in Valencia.

Stroll through the Turia Park 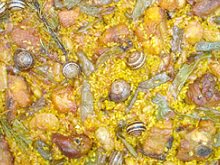 The Turia River was diverted from the centre of Valencia in the 1960s after heavy flooding. The resulting river basin was turned into a 12km long park, full of museums, sports facilites and large green spaces.

The park is always buzzing with people and events, and is really enjoyable to go for a stroll through it. At one end is the magnificent City of Arts and Sciences, a complex of several museums, an aquarium and an exhibition centre, which is a fantastic feat of architectural design. The large white buildings tower over the park, creating one of the iconic images of Valencia.

The local drink of the Valencia region is served throughout the city. It looks a bit like milk, but is in fact a combination of tiger nuts, sugar and water. Horchata is usually served 'granizado', which is just at the point where the water starts to freeze. It is a great way to get refreshed on a hot day.

You can find 'horchaterias' throughout the city, but Valencia's regard the Alboraya district as being the home of the drink. 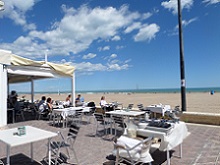 Valencia's beach is set a few kilometres from the city centre; apparently the Romans believed a city directly on the coast to be too vulnerable to attacks and looting from pirates. Nevertheless, it is easily reached by metro, tram, bus or bicycle, and is definitely worth the trip.

The beach is well over 100m wide and stretches for over 4km north from the port. The beach also sloped out very gently into the sea, meaning that there is ample space for swimming. There are a lot of football pitches and volleyball courts, if you fancy doing something sporty, and, of course, there are many restaurants and cafes running the length of the coast.

The El Carmen district, stretching from Plaza Ayuntamiento to Torres de Serrano, is the historic centre of Valencia. In the streets here you will find La Lonja (the old silk exchange) and the cathedral. It is also enjoyable to walk around the maze of narrow streets, containing niche shops and small, independent cafes.

Valencia has thousands of bars and restaurants, catering to the tastes of everyone. In the area around El Carmen and Canovas in the city centre there are many sophisticated clubs, some of which border on pretentious. In the Ruzafa area you can find the restaurants where the locals typical eat, with a large range of Spanish and international cuisine.

The areas of Benimaclet and around Avenida de Blasco Ibanez are where the students hang out. Here you find the more indie bars, with cheap drinks and a very relaxed atmosphere. We would recommend trying them all out to see which you prefer!

If you are booked on one our cycle tours and would like us to assist you in the booking of train tickets, please do not hesitate to contact us.