This easy going tour, through one of the most remote regions in Spain - the Cabo de Gata Natural Park. With the highest winter temperatures and lowest rainfall on mainland Europe, this beautiful region offers perfect conditions for cycling throughout most of the year.


This cycling holiday visits beautiful, historic towns and passes through Natural Parks and along wild, rugged coastlines. You will stay in top quality hotels, chosen for their location as well as their comfort.

The tour is rated as easy; however, there are several optional extensions each day - some into the nearby mountains - which can increase the daily distances and the difficulty of the holiday. 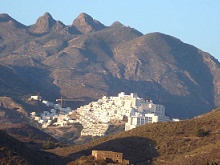 We will meet you at Almeria or Alicante airport and transfer you to the small village of Mojácar, where the holiday begins.

Mojácar has been inhabited for over 4,000 years, becoming established as a trading post under the Phoenicians and Carthaginians, before growing to prominence during the Muslim rule of Spain. Its small castle and several of the white houses date from this era.

Your hotel is in the heart of the village, allowing you to easily explore the narrow, winding streets of this historic gem. 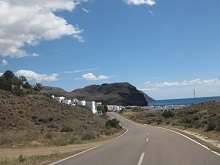 The first day in the saddle begins by heading downhill out of Moj´car, along winding narrow lanes until you reach the coast.

The majority of the ride is then spent riding a stunning remote road which rolls gently alongside the coast, offering incredible views throughout.

The day finishes in a stunning cortijo set in the beautiful countryside. 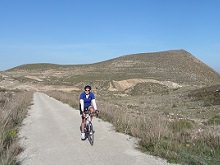 The cycle tour continues heading south from Carboneras, with the landscape becoming ever more wild and untouched, as you enter the Cabo de Gata Natural Park.

The Cabo de Gata was produced by volcanic rock formations and is recognised as a UNESCO Biosphere site, as a result of its natural beauty. Due to its protected status, the reserve has become a haven for many birds - most strikingly the flamingo, but the park also contains many fantastic beaches and coves along its coastline.

You stay in a fine spa hotel in the heart of the park, one of the most peaceful settings in Southern Spain. 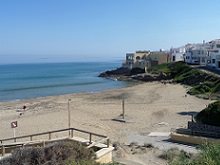 Today you follow a route entirely within the boundaries of the stunning Cabo de Gata Natural Park. It is gently rolling with several options depending on how far you wish to ride.

The scenery today is really spectacular as you pass alongside cactus fields, almond groves and the rugged coastlines.

The day finishes in the coastal village of San Jose, home to a fine beach and some of the best restaurants in the region. It is a tranquil and beautiful place to relax - making it somewhat surprising that the most famous former resident of the village was Joe Strummer, lead singer of the punk rock band The Clash. 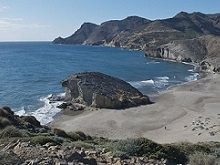 The route today is optional, but we highly recommend it. From San Jose it is just a short ride along the coast to two of the most spectacular beaches in the whole of Spain.

First you reach Playa Genoves - a huge sandy beach situated on the most extreme south-eastern point of the Iberian Peninsula. From there it is just a short distance further along a quiet track to Playa de Monsul.

Playa de Monsul is a dream beach; it is very quiet and isolated with perfect golden sand, surrounded by dramatic cliffs and with crystal clear water. Director Steven Spielberg was such a fan that he moved the whole film crew to the area during the production of Indiana Jones and the Last Crusade, to shoot a scene on the beach. 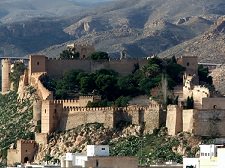 The final day on the cycling holiday continues through the Cabo de Gata park, passing the salt flats that make up the western part of the reserve.

The route here continues to be serene and peaceful, giving you a real feeling of being close to the surrounding nature.

The holiday finishes in Almería, a city with the warmest winters of anywhere in mainland Europe. In addition to warm weather, Almería is another city packed with historic mounments.

The 10th century Alcazaba is the second largest Muslim fortress in Spain (after the Alhambra Palace in Granada), and the fortified cathedral - built to withstand attacks from pirates - are among the best preserved buildings.

Day 7 – Possibilites to Extend the Tour 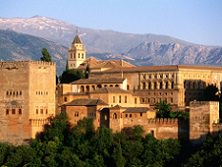 The tour comes to an end after breakfast in Almería.

We will transfer you to Almería or Malaga airport in time for you flight home.

Alternatively, there are several great options if you wish to extend the holiday, including visiting the nearby city of Granada - one of the most spectacular historic sites in Europe.

Groups of six people or more contact us to arrange a private guided tour starting on any date.

There are two route options each day; the shorter route averages around 25km, while the longer route is around 40km.

There are also additional extensions if you would wish to cycle further.

Most of the routes are on fully asphalted roads, but Day 5 is mostly on a gravel track as you ride to the hidden beaches.

This tour is rated as easy. The routes are mostly gently rolling or flat and the daily distances are low.

If you would like to do a more challenging tour in the region, please let us know and we can adjust the itinerary accordingly.

Can I personalise or change aspects of this tour?

Absolutely! We have designed a tour that we feel strikes a great balance between cycling routes, accommodation and interesting towns. However, if, for example, you would like to do the tour for a different number of days, stay in a different level of accommodation, or extend the route to a different location, we would be happy to discuss the options with you.

The cost is made up of the extra cost of accommodation when the room is single occupancy and also the greater cost of the transfers (luggage and people) when it is not split between two or more cyclists. We have made every effort to keep this to a minimum wherever possible.

The arrival point for this tour is one of Alicante, Murcia or Almeria. Alicante has the larger of airport so you will probably find it easier to find a flight to there. As well as the airport, we can also pick you up from the train station.
Departure is from Almería airport or train station. This is a fairly small airport; however, it does have regular flights to many European destinations.

If you can not find a convenient flight from Almería, we can also transfer you to Malaga airport for an additional charge of €25. Malaga is Spain's third largest airport (after Madrid and Barcelona) and serves cities in almost all Euorpean countries, so it should be easy to find a connection from here.


Another option is to extend the trip with a stay in Granada for a few nights.

How busy are the roads?

The vast majority of this tour is on narrow country lanes and quiet routes through Natural Parks.

This area is sparsely populated and there is very little traffic on the roads.

Both road bikes and hybrids are available for this tour. However, we would recommend hybrids as the distances are quite low and the more upright position will allow you to fully appreciate the scenery. Also, the route on Day 5 is only possible to do on a hybrid bike.

This tour is available starting on any day throughout the year.

The most popular period is from late September through to early June. This is when the weather is warm, but not too hot, and the area is not as busy as in the height of summer.

Winter is a particularly good time to visit as the weather is dry and warm and the villages are still lively, unlike many coastal areas which can shut down in the off-season.

The Almer&iacutea region contains the only desert in mainland Europe, which gives a fair indication of how much rain the area gets.

The region also has very mild winters, with daily temperatures regularly over 20 degrees celsius. Temperatures in July and August often touch 40 degrees celsius, so unless you have experience of riding in these conditions, we would recommend avoiding the height of summer.


We believe that the hotels that you stay in are just as important as the towns that you visit and the scenery that you ride through. On this tour we have chosen accommodation that is of a high quality and is typical to the area.

In the smaller villages we use high quality independent hotels with charm and local character. In Almeria, this is a luxurious hotelset in a prime location for exploring the city.

In Mojáar you stay in a small boutique hotel, run by a charming local family in the heart of the historic center. 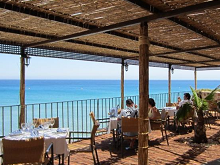 Here you stay in a stunning country cottage, built in the traditional Andalucian style. It has a swimming pool and plenty of space to relax in comfort.

The hotel today in Rodalquilar is a small **** spa complex with a swimming pool, saunas and Turkish baths, as well as fantastic grounds for relaxing and soaking up the sun.

Here you stay in another small, boutique **** hotel. Set directly on the beach, the hotel is beautifully styled with real individual charm.

On the final night you stay in a **** hotel in the heart of the city. This is a very comfortable and high quality hotel, less than a five minute walk from both the cathedral and the alcazaba.


If you would like to do this tour in a group of more than six people as a guided tour, please contact us and we can arrange a private guided tour.