This unique tour is designed for cyclists that wish to test themselves on some of the most challenging road climbs in Spain. On this epic holiday you will tackle Angliru, La Farrapona, La Cobertoria, Ancares and many more of the climbs that make the Vuelta a España one of the most demanding events in sport.


The scenery is diverse and spectacular throughout, with each climb offer breath-taking views across one of the most beautiful regions of Spain. This is a tour that requires some previous cycling experience, with the average daily distance around 90km, and with a lot of climbing.

This is a beautiful and rewarding tour; one on which any keen tourer or club cyclists will have an unforgettable experience. The tour can be combined with our Picos de Europa holiday if you would like to tackle even more of the region's great climbs. 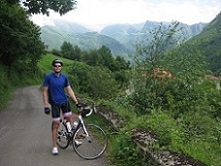 The tour begins in the historic city of Oviedo, the capital of the Asturias region and a charming place to start the holiday.

After being fitted to your bikes, and depending on your arrival time, there is the opportunity to do a circular route around the rolling green hills to the north of Oviedo.

This is not an especially strenuous day, but is a good opportunity to shake out any rustiness in the legs, in preparation for the challenges that lie ahead. 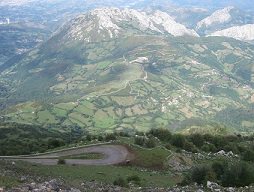 The first full day in the saddle begins relatively quietly, following narrow country lanes towards the Sierra del Aramó mountains. After a rolling section, the climbing begins - and what a climb!

Today you ascend one of the most feared and challenging climbs in road cycling - the Alto del Angliru. Star of the show at the 2013 Vuelta, Angliru is one of the toughest mountains in professional road cycling. The climb averages 9.9% gradient over 12.5km, with the last six kilometres closer to 13%.

After descending Angliru, there is just one more climb - El Cordal - yet this will seem like a false flat after conquering Angliru! If you wish to do the longer route, there is the option to continue to Puerto de Pajares - another popular Vuelta climb. 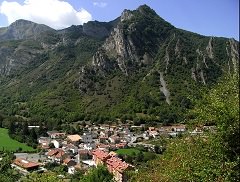 The climbing begins straight away on this beautiful route, as you are immediately thrown on to the slopes of La Cobertoria. At 9.9km long, and with an average gradient of 8.8%, this is a challenging climb; although the fairly consistent gradient makes it possible to find a steady rhythm.

After a descent and flatter section through the Teverga Valley, you climb the Puerto de San Lorenzo, a spectacular route which takes you into the Somiedo Natural Park - one of the most remote regions in Spain.

The longer route finishes by climbing La Farrapona - a decisive stage finish in the 2014 Vuelta a España, and one of the most enjoyable climbs that you will ever do on a bicycle.

The day ends in Somiedo; a beautiful mountain village in the midst of stunning natural scenery. 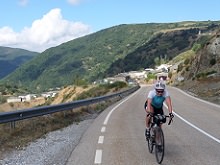 Today you do a circular route around the edge of the Somiedo Natural Park. This is one of the most undeveloped and picturesque regions in Spain and is home to an incredible range of wildlife, including brown bears, wolves and golden eagles (don't worry though, they are notoriously timid, and shy well away from humans)!

The main climb today is the Puerto de Ventana, with the longer route also ascending to Puerta de la Magdalena - in the neighbouring region of Castille and Leon.

This is a fairly long route, with two significant climbs, but they don't have such steep gradients as in the previous two days, so it is a more comfortable day in the saddle. 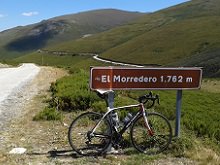 The shorter route today is the easiest on the holiday and is something of a chance to recover for the final two days. Despite the long distance, there is just one climb - Puerto de Somiedo - at the start of the day, before a long route heading gently downhill through the valley.

The longer route includes a climb to Leitariegos, a gentle climb notable for a high number of switchbacks on its lower slopes.

The day finishes in Villafranca del Bierzo, a picturesque small town which is home to a historic castle. Villafranca is a popular stop on the Camino de Santiago route; although it is probably even more famous for the excellent wine produced here. 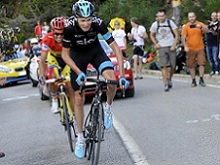 The shorter route today climbs to O'Cebreiro, a tiny village which, according to legend, was the one time home to the Holy Grail. This is a beautiful route with quite gentle ascents, before a stunning rolling return through the Ancares National Reserve.

The longer route also includes a climb to Puerto de Ancares - an absolutely stunning climb which was the site of a famous mano-a-mano between Chris Froome and Alberto Contador in the 2014 Vuelta a Espańa.

The Ancares National Reserve - including the main climb - has been described by Tour de France winner Carlos Sastre as 'a cycling paradise', and the description is certainly merited for one of the most beautiful and unspoilt spots in Europe. 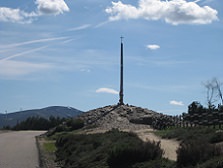 The day begins with a flat section before tackling three climbs in one. On the way to Llanos de las Ovejas - a 1500m ascent over 33km - you will also conquer the Morredero and Portillinos passes.

This climb is like no other on the tour: the scenery is barren unlike the green of Ancares and the Somiedo; there is no shade and the gradient teases you constantly, backing off to 2% before launching into another 10% section. It is, however, a beautifully peaceful climb and an excellent challenge.

The longer route gives the possibility to visit Las Medulas - an incredible UNESCO World Heritage Site, which was the most important gold mine in the Roman Empire.

The day comes to an end in Ponferrada - host city of the 2014 Cycling World Championships. Here you can recreate the solo breakaway win on a descent by Michal Kwiatkowski, or perhaps follow some of the course which Bradley Wiggins rode on his way to claiming the Time Trial title.

Ponferrada is also home to the Knights Templar Castle - a superbly preserved monument dating from the 12th century. 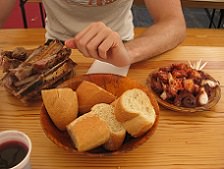 After breakfast the tour comes to an end in Ponferrada. You may wish to extend your stay here or in the nearby cities of Leon or Santiago de Compostela.

Ponferrada has excellent train connections to both Santiago and to Madrid - both of which have busy international airports. Please contact us if you would like more information on the possiblities of extending the holiday or getting home from Ponferrada.


The following is included in the tour:

There are two basic route options to choose from each day. The shorter route is usually between 70km and 90km (there is one longer day, but it has relatively little climbing and is mostly downhill).

The longer route is usually over 100km and contains an additional climb.

There are optional extensions each day for those of you who to wish to cycle even further.

You are free to mix and match the routes, as they both start and finish in the same place. If you wish to do the shorter route one day, then the longer route the next day, for example, it is entirely up to you.

If you choose the shorter routes then this is classified as a challenging tour. There is significant climbing every day, but the routes are not extremely long.

The long routes are hard and will challenge most cyclists. There are multiple climbs each day and the distance is long. However, it is not a race, so as long as you go at a steady pace they are perfectably manageable for strong touring cyclists or club riders.

Which famous mountains will I climb?

The following are some of the most famous and spectacular mountains that you will climb on the holiday:


(L) = On longer route only (E) - Available as an optional extension

Oviedo is the arrival point for this holiday. Oviedo is served by Asturias Airport, which has international flights, as well as regular domestic routes. It also has a train station with several trains running each day to Madrid.

The depature point is Ponferrada. From Ponferrada there are regular trains to Madrid and Santiago de Compostela (both of which have busy international airports). The trains from here are mostly low cost (less than €30) and run five or six times throughout the day.

Ponferrada is also well connected to the attractive cities of Leon and La Coruña, in case you would like to continue your holiday somewhere nearby.

If you have trouble finding a good connection to and from Oviedo/Ponferrada, please contact us, as it is may be possible to arrange transfers from other cities in the area, such as Santiago de Compostela or Madrid.

What weather can I expect?

From June to October the weather in the Ancares and Somiedo Mountains is usually very good for cycling. It is warm, but without the searing temperatures that are common in much of Spain throughout the summer months. Typical day time temperatures range from 20-25°C (68-77°F).

Rain is not especially common, but there are a few wet days in each month - even during the summer - so be prepared for this possibility. There is a good chance though that you will have dry, sunny days throughout the holiday.

Can I see the altitude profiles for each day?

We believe that the hotels that you stay in are just as important as the towns that you visit and the scenery that you ride through. On this tour we have chosen accommodation that is of a high quality and is typical to the area. These include mountain chalets and small boutique hotels in the center of the villages where you stay.

In Oviedo you stay in a luxurious **** spa hotel situated in the historic old town. It is less than a five minute walk from Oviedo Cathedral and the Holy Chamber - a UNESCO World Heritage Site.

In Lena you stay in a highly rated hotel in the center of the small town. The hotel is close to several excellent restaurants and offers great views of the mountains to the west.

You stay for two nights in the finest hotel in the delightful village of Somiedo. The hotel is small, with fewer than twenty rooms, and is housed inside a stone building which is traditional to the region. It is in the center of the village, close to a local shop and several restaurants.

Here you will stay in the Parador Hotel - a luxurious **** accomodation set amongst private gardens and with both an indoor and outdoor pool. The breakfast at the Parador is one of the best in Spain and will set you up well for a long day in the saddle!

The tour finishes in a historic hotel, situated next to the town hall in the pedestrianized center of Ponferrada. It is a five minute walk to the 12th century castle, and is a great location for relaxing and soaking up the atmosphere of this charming town.

Contact us for information about doing a custom tour such as this.